How Flow Cytometry is Changing the Way We Manage Sepsis

Sepsis represents a major healthcare issue across the globe, with estimates of 20-25 million cases, and 6 million deaths per year attributed to sepsis. In the US, sepsis cases are higher than those of heart attacks, and all cases of breast and colon cancer combined (Global Sepsis Alliance & World Sepsis Data, www.world-sepsis-day.org). The World Health Organization officially recognizes sepsis as a global health priority that currently is highly under-resourced in terms of prevention, diagnosis, and disease management.

Sepsis is a condition that arises when a body’s response to infection causes organ dysfunction. This can occur if the body is overcome by the infection, or if there is an aberrant response by the immune system resulting in a dysregulated inflammatory response. Depending on the infection, sepsis can affect different organs, including the brain and lungs, resulting in a range of symptoms. This heterogeneity makes sepsis difficult to accurately and rapidly diagnose and therefore the mortality rate from sepsis is believed to be highly under-reported. Moreover, long-term mortality is significantly increased following severe sepsis, indicating long-term immune alterations. As a result, sepsis is often referred to as ‘the deadliest killer you’ve never heard of.

Flow cytometry is changing all of this by revealing the wide spectrum of immune response syndromes that are all described as sepsis. This detailed interrogation is also disclosing the immunology of sepsis and helping clinicians to identify novel therapeutic strategies, many borne out of targeted cancer therapies, to modulate the immune response in different stages and presentations of sepsis. Collectively, these advances are now shifting the paradigm of decades of unsuccessful approaches to sepsis. In this blog, we explore the impact of flow cytometry-based immune cell profiling on this area of medicine, and its potential to save millions of lives.

The Immunology of Sepsis

The early activation of the innate immune system represents the first line of defense against pathogen infection and is central to the targeted activation of adaptive immune responses. However, unregulated and excessive immune responses can lead to alterations in critical features of both the adaptive and innate mechanisms that if unresolved can contribute to protracted immunosuppression and opportunistic infection(s) associated with sepsis.

Sepsis is associated with a pro-inflammatory phase followed by an anti-inflammatory phase that has the potential to become immunosuppressive (Fig. 1). These stages have been correlated with specific bioenergetic, epigenetic, and transcription modifications affecting both the innate and adaptive immune system pathways. The immune status of patients with sepsis has a profound effect on the underlying pathophysiology and progression of sepsis. In general, the initial pathophysiological response in sepsis is a hyperinflammatory phase that can last several days – this phase of sepsis is associated with the highest levels of mortality. This hyperinflammatory phase is followed by a prolonged immunosuppressive phase that is driven by a range of factors that include the enhanced proliferation and survival of Tregs, the apoptotic depletion of lymphocytes, the increased expression of negative co-stimulatory molecules, a shift towards Th1/Th2 polarization, and increased PD-1/PDL-1 expression on CD4+ T-cells driving cellular exhaustion. 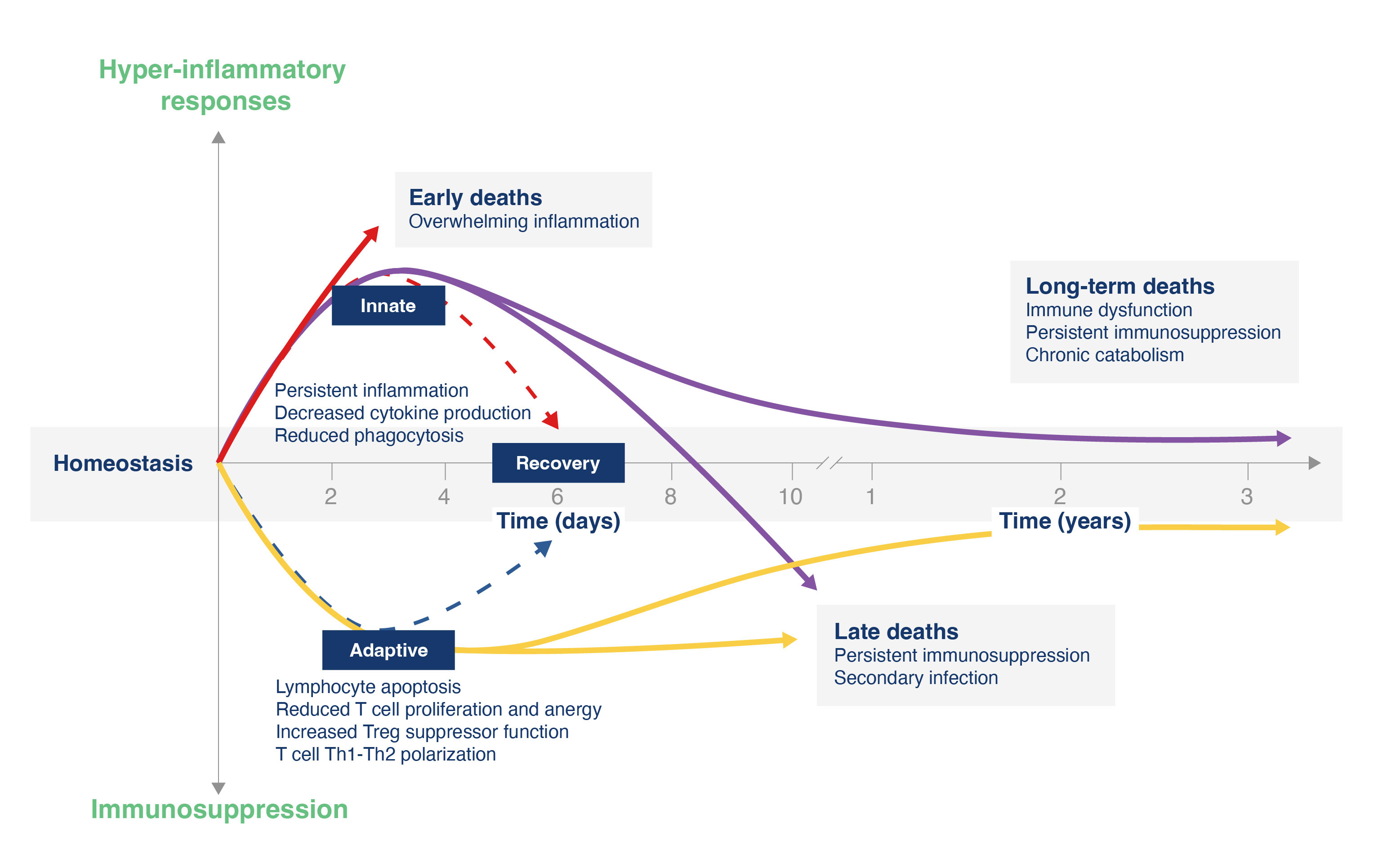 Figure 1. The pathogenesis of sepsis. Peak mortality is associated with an overwhelming inflammatory response known as a cytokine storm (shown in red). Cytokine Storm is associated with fever, refractory shock, and cardiac and pulmonary failure. Mortality during later stages of sepsis is a consequence of prolonged immunosuppression (shown in yellow) resulting in secondary infections and organ failure. Sepsis patients also show increased mortality several months/years later, due to immune dysfunction or chronic catabolism (shown in purple).

Flow cytometry-based monitoring of immune cells during sepsis is revealing the drivers of these inflammatory and immunosuppressant phases and provides opportunities for personalized and targeted therapeutic intervention based on a patient’s immunological status and sepsis progression profile (Fig 2). 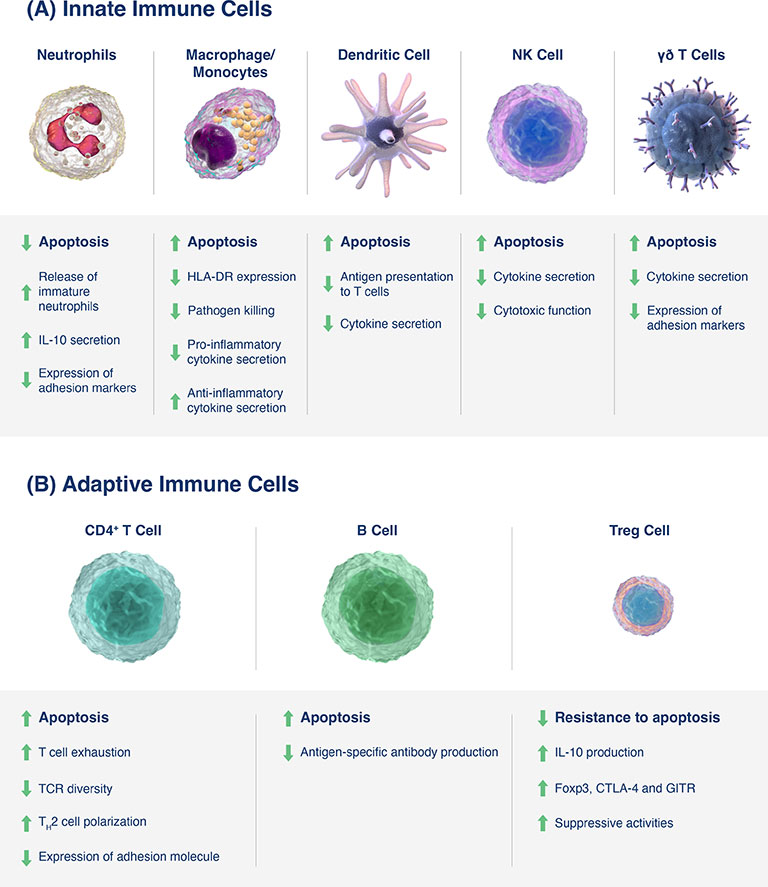 Figure 2. Summary of sepsis-induced immune system dysfunction. Lymphocyte loss due to apoptosis diminished the capability to fight infection. The lymphocytes most influenced by this effect are macrophages, monocytes, dendritic cells, NK cells, γδ T-cells, CD4+ T-cells, and B-cells. In contrast, apoptosis of neutrophils is delayed resulting in dysregulated immune response with increased cytokine and reactive oxygen species resulting in organ damage. Tregs appear to be somewhat resistant to sepsis-induced apoptosis.

Neutrophils play a central role in managing pathogens and coordinating innate and adaptive responses through Antigen Presenting Cell (APC) functions. They are typically labile in nature, however, under the early stages of sepsis, neutrophil counts have been shown to dramatically increase through a mechanism of delayed apoptosis, and the release of immature neutrophils from the bone marrow. These lead to neutrophil dysfunction and the inhibition of critical functions including oxidative burst, cell migration, and complement activation, and as a result pathogen clearance by neutrophils is highly diminished. The underlying mechanisms that govern the neutrophil response during sepsis are not clearly understood, but intravenous endotoxin or lipopolysaccharide may play a role in apoptosis suppression in these cells. These findings have been leveraged to support a targeted strategy of inhibition of cyclin-dependent kinase 7 and 9 to specifically modify the neutrophil sepsis responses, driving them towards apoptosis and resolving sepsis-associated inflammation for an improved clinical outcome (Leitch 2012).

Figure 3. Dysfunction of low-density neutrophils in peripheral circulation in patients with sepsis. FACS analysis of neutrophil profiles in healthy (left) versus in a sepsis patient (right). Sepsis patient displays an overall reduction in neutrophil numbers (refer to y-axis ‘Count’) and a shift towards an increased proportion of immunosuppressive LDN subset. (Adapted from Sun et. al. 2022).

During the initial phases of sepsis Monocytes and Macrophages secrete pro-inflammatory cytokines including TNF-α, IL-1β, IL-6, and IL-12. As sepsis progresses, dysfunction of these cells decreases the release of these cytokines whereas the release of anti-inflammatory mediators including IL-10 and IL-2 receptor antagonist remains consistent. A clear correlation between sepsis and decreased monocyte mHLA-DR expression was one of the first ‘biomarkers’ for sepsis-induced immunosuppression and risk of nosocomial (healthcare-acquired) infections and mortality (Monneret 2015; Monneret, 2006). This contrasts with hemophagocytic lymphohistiocytosis (HLH) which is characterized by increased inaugural mHLA-DR expression and a heightened inflammatory response (Remy, 2018). These two conditions may present similarly in ICU patients but required opposing treatments – as a result, the mHLA-DR expression has become an important immuno-monitoring tool in emergency labs. The administration of GM-CSF to septic patients was shown to induce sustained mHLA-DR recovery, coupled with the ex vivo capacity to produce TNF-α. Responding patients were later stratified by their display of low mHLA-DR (below 8000 AB/C) on two consecutive days (Nierhaus 2003). 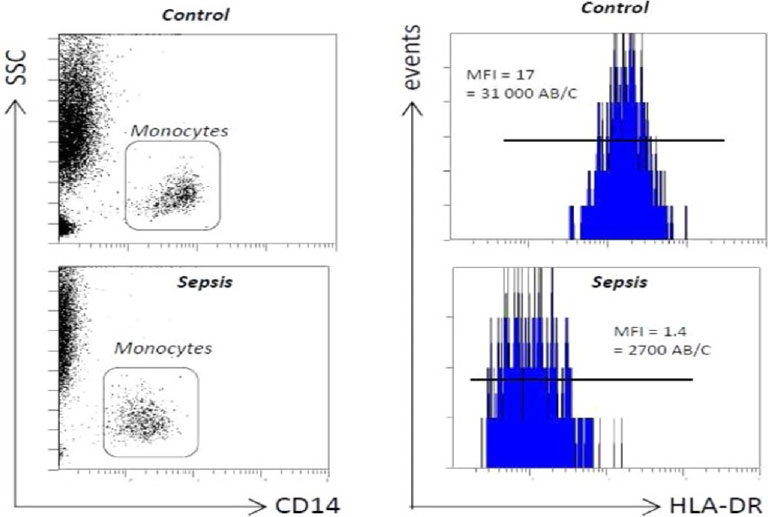 Under normal conditions, macrophages perform two polarizing functions- M1 inflammatory responses and M2 immunosuppressive functions, however during sepsis, there is extensive depletion of macrophages and a drive towards M2 characteristics. The prominent release of anti-inflammatory cytokines such as IL-10 and IL-1ra significantly impair the antimicrobial defenses. It has been proposed that sepsis-induced macrophage dysfunction could be mitigated through the administering of anti-apoptotic- or the inhibition of proapoptotic proteins to prevent depletion of these cell populations through the modulation of BcL-2 (Peck-Palmer, 2009).

Dendritic cells are the most potent APCs and fulfill roles in both the innate and adaptive immune responses. There are two distinct types of DCs conventional cDCs and plasmacytoid pDCs with different cytokine secretion profiles. Both types of DCs are markedly reduced in the peripheral tissues and circulation during sepsis. Those remaining DCs display a loss of expression of CD40, CD86, and MHC-DR, and increased production of IL-10; this correlates with the transformation of these cells into so-called tolerogenic DCs, displaying immunosuppressive properties via a reduced potential to induce allogenic T-cell activation and the promotion of Treg proliferation. Blocking sepsis-induced DC apoptosis is now being evaluated as a treatment strategy for sepsis (Gautier 2008).

The high load of NK cells within organs and tissues has made them a focus of sepsis research. NK cells characterized as CD3-/NKp46+/CD56+ are considered immune system regulators and form two distinct populations based on CD16 and CD56 expression. Under conditions of sepsis, both CD56hi and CD56low NK subpopulations are diminished and the cytotoxic functions of NK cells are severely reduced. This implies that an immunosuppressive NK-cell response might proceed with the development of sepsis (Chiche 2012).

Although sepsis is associated with lymphopenia, the percentage of Tregs (based on the phenotype CD4+/CD25high) increases during sepsis (Monneret, 2003)). It was proposed that this was due to the resistance of these cells to the apoptotic mechanisms triggered by sepsis. The development of more robust flow cytometry panels with the additional Treg markers FoxP3 and CD127 confirmed this crucial feature of sepsis. Moreover, the enumeration of Tregs (typically reported as a percentage of lymphocytes) has become an important marker for an ICU patient’s risk of nosocomial infections and is being used to stratify patients for immune system-intervention. This includes anti-PD-1 and anti-PDL-1-based therapeutics that have been shown to reverse T-cell exhaustion and improve the overall function of T-cells to fight infection.

γδ T cells are a distinct population of T cells that play a role in protecting tissues against damage from infection. They have a highly expansive function and are mainly located in epithelia as the first line of defense. Uniquely, these cells display the capacity to recognize microbial metabolite and lipid peptides directly without the involvement of the major histocompatibility complex (MHC). Studies have shown that the most significant loss of T-cells during sepsis is in this γδ population, in addition, this was associated with a reduction in CD69 and IFN-γ that was more pronounced in non-survivors versus survivors (Liao 2017).

One of the reasons that sepsis remains a major cause of death globally is the overall complexity and heterogeneity of the immune system mechanisms at play. During the initial phases of sepsis, the immune system homeostasis is completely lost through a dysfunctional inflammatory response, and this is followed rapidly by a compensatory anti-inflammatory, immunosuppressive response. Flow cytometry profiling of patients transitioning through these phases of sepsis demonstrates a marked decrease in absolute lymphocyte counts resulting in a reduced ability to fight infection. Lymphocyte apoptosis is the underlying mechanism for this depletion. However, this analysis has shown that this lymphopenia is variable across cellular subsets with CD4+/CD25high/CD127/Fox P3+ Tregs being less affected than other subpopulations (Morrison, 2013; Liu, 2019).

Armed with these insights into immune status, the clinical assessment, and treatment of sepsis are entering a new era of precision medicine. Profiling a patient’s specific sepsis syndrome is enabling therapeutic interventions, some of which are borne out of immune-oncology strategies, to be successfully applied to manage sepsis. An example of this relates to the use of checkpoint inhibitors. To date, PD-L1 expression has been described during sepsis on macrophages neutrophils, endothelial cells, and monocytes – and monocyte PD-L1 is described as an independent predictor of 28-day mortality with septic shock. This strong association is opening the door to the employment of checkpoint inhibitors that block the T-cell exhaustion PD-1/PD-L1 axis for therapeutic intervention for some cases of sepsis (Meghraoui-Kheddar 2020).

These types of immuno-modulation strategies will not save every patient with sepsis, but immune system evaluation using flow cytometry can certainly identify those patients most at risk and depict immune trajectories as sepsis progresses. Flow cytometry has reshaped our knowledge of sepsis and is enabling clinicians to establish new strategies to address this deadly disease.