Quantum Dots- Are They Ready for Primetime Flow Cytometry?

What exactly are Quantum Dots?

Quantum dot technology is a rapidly growing field in material sciences that is set to revolutionize everything from medical imaging to our televisions and computer screens. Quantum Dots (Qdots) are semi-conductive nanocrystals that are made of artificial atom clusters. They are composed of a central core usually made of cadmium plus selenium or tellurium that is coated with a zinc sulfide shell (Fig. 1). To make Qdots water soluble for biological applications, the surface is coated with hydrophobic ligands such as polyethylene glycol, or amphiphilic polymers. Qdots are typically between 2nm to 20nm in diameter, and their core diameter and overall size dictates some of their physical properties, such as their color. The quality of the interface between the core and the shell has a significant impact on the signal emitted from the Qdots. But the spectral properties are also influenced by the Qdots size dispersion, their shape and by the presence of surface defects. Different sizes of Qdot cores absorb and emit photons of light at very distinct wavelengths- the larger the Qdot core size, the longer the wavelength emitted. 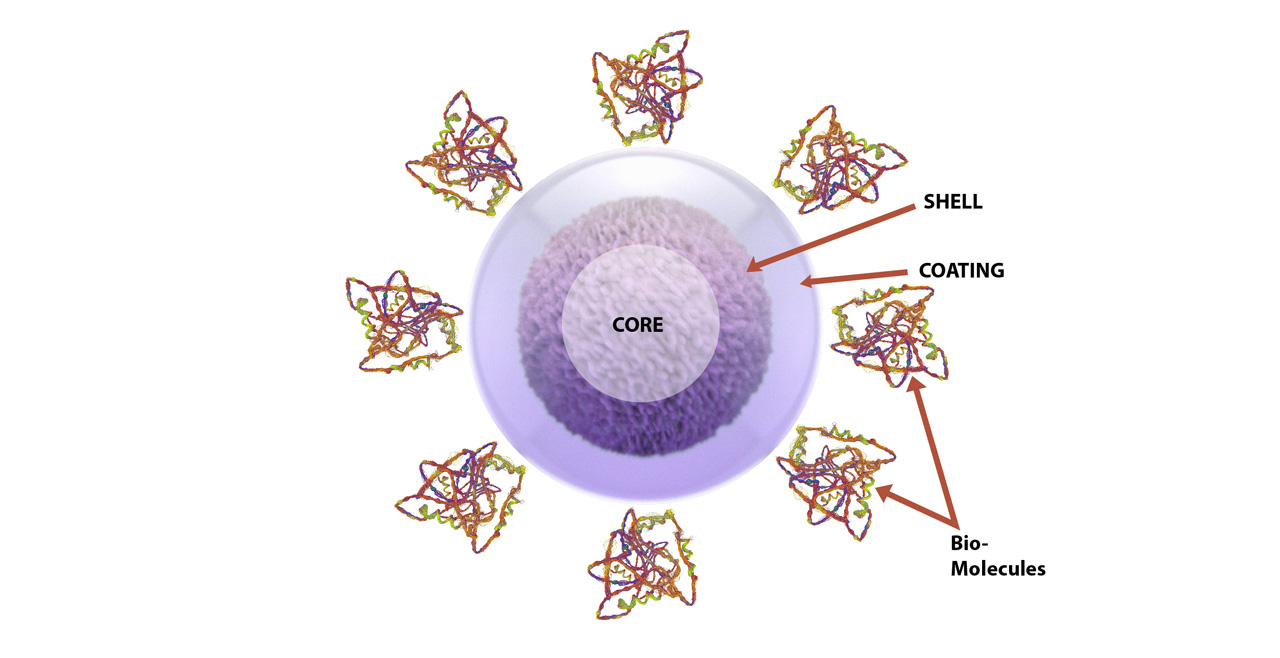 Figure 1. Schematic of Quantum Dot structure. It is the size of the quantum dot core that influences the range of motion of atoms within the structure and therefore their spectral properties. The quality of the interface between the core and the shell, as well as the consistency of the coating and biomolecular layers, all have an impact on the spectral properties of the Quantum Dot.

How do Quantum Dots Compare with Traditional Flow Cytometry Fluorophores?

One of Qdots most useful spectral features for flow cytometry applications is their long ‘Stokes Shifts’- this describes the Qdot’s absorption of a photon of light, from which it gains energy and enters into an excited state. A photon is subsequently emitted, and when this photon has less energy than the absorbed photon, we refer to the energy difference as the Stokes shift. It occurs because some of the energy of the excited Qdot or fluorophore is lost through molecular vibrations within the structure and dissipated as heat to surrounding molecules. We calculate the Stokes shift by comparing the Excitation max wavelength with the Emission max wavelength of a given fluorophore or Qdot (Fig. 2). A larger Stokes shift is desirable in a fluorophore for flow cytometry since it eliminates the spectral overlap between the absorbance and emission signals and generates a stronger fluorochrome signal, with reduced interference and quenching. In addition, Qdots display narrow emission spectra, meaning there is limited overlap between colors, and they tend to be very bright. Since their color is dictated by the core size, it is possible to custom build Qdots for customized emission spectra.

Figure 2. Every fluorophore has a Stokes shift. For Flow Cytometry applications, a larger Stokes shift is desirable to provide a strong and more easily discernible signal.

How do Qdots compare with more traditional organic fluorophores?

Like Qdots, traditional organic fluorescent probes used in flow cytometry have spectral properties that are used to detect them in the flow stream. They share similarities in the way light is processed; when hit by the laser light, electrons within the fluorophore structure are energized to jump from a resting state to a maximum energy state, falls back down to a more stable level, at which point the fluorophore experiences a confirmational shift that coincides with a release of heat. When the electron finally returns to the resting state, the remaining energy is emitted from the molecule in the form of light. Summarized in Jablonski diagram Fig. 3.

The way light photons are processed within organic tandem dyes is slightly different. Tandem dyes were initially developed in order to extend the usable spectrum for any given flow cytometry laser and get longer emissions from a single excitation source. They consist of two covalently attached fluorophores, a donor and an acceptor fluorophore, that together leverage Förster Resonance Energy Transfer (FRET) to generate spectral signature consisting of the excitation properties of the donor and the emission properties of the acceptor. The FRET between the two molecules is outlined in Fig. 4.

There are some downsides to the use of tandem dyes including their sensitivity to light, changes in temperature and fixation, and staining is usually performed at 4˚C. In addition, there is always bleed through emission from the donor and therefore isotype controls should be used to determine true background, FMO controls for gating, and single-color controls to adjust the compensation of the tandem dye.

Figure 3. A schematic for the Jablonski diagram of Fluorescence for a traditional fluorophore. 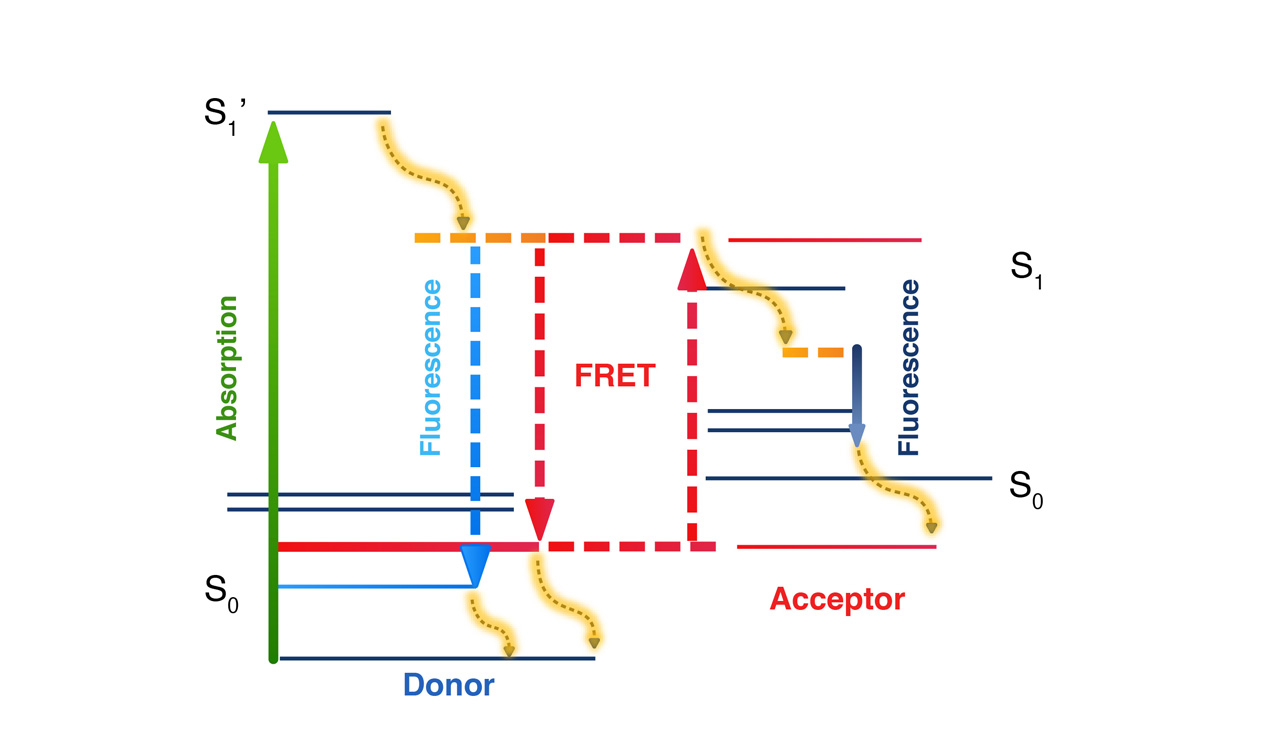 Figure 4. A schematic of the Jablonski diagram of FRET in tandem dyes.

What are the advantages do Qdots offer in flow cytometry?

From a spectral perspective, Qdots are great for flow cytometry, they are brighter and more photostable than traditional and tandem organic fluorophores, and uniquely Qdots can be excited using a wide range of wavelengths and have very narrow emission spectra for outstanding performance multiplexed panels. Some of the most prestigious flow cytometry teams have published very complex panels using Qdots alongside tradition fluorophores (Chattopadhyay et.al. 2010) and describe their advantages in terms of excellent sensitivity with minimal compensation and spreading error. However, these panels also demonstrate that due to their broad excitation spectrum, Qdots can be excited by any laser, and this results in fluorescence in the same channels that may be used to read traditional and tandem dyes, and it is critical that this fluorescence be compensated for.

So, start with the tertiary markers and use a bright Qdot such as QD655, QD605 and QD585 on these targets.

Move onto the secondary markers and assign a slightly dimmer Qdot such as QD545, QD565 or QD800.

Finally, your primary markers should be assigned to your dim channels or with fluorochrome pairs that might generate spreading errors through spectral overlap. For mutually exclusive markers such as CD4 and CD8, neighboring Qdots (e.g., QD545 and QD565) can be assigned and readily resolved by gating. A great resource for this process is Chattopadhyay et. al. 2010.

So why aren’t we all using Qdots in our flow cytometry panel?

Well, the truth is while Qdots have somewhat perfect spectral characteristics for flow cytometry, there are nuances to their use.

Conjugation: Since there are only a few commercial sources of Qdots, there are even fewer commercial sources of Qdot -antibody conjugates, meaning that researchers often have to generate their own conjugates in house. Qdots can be cross-linked to antibodies using covalent conjugation that utilizes the coupling of maleimide groups on the outer surface of the Qdot to free thiol groups on the antibodies. Simple coupling reactions use sulfosuccinimidyl 4-N-maleimidomethyl cyclohexane-1-carboxylate (sulfo-SMCC) to activate the Qdot and dithiothreitol (DTT) to reduce the antibody for coupling. Other researchers have employed Click Chemistry of even Streptavidin-Biotin to conjugate the Qdots and antibodies. However, there are several reports of antibodies that for whatever reason cannot be coupled to Qdots. In addition, because of their size, each Qdot can conjugate many antibodies, which may not always be desirable for flow cytometry. Interestingly, the spectral properties of some Qdots have been shown to change when conjugated, with shifts in emission wavelength and intensity. Whether this is due to changes invoked by the linkage chemistries, or the antibody molecules isn’t clear, but it does mean there can be significant batch to batch variations in Qdot conjugates.

Consistency in Qdot Quality: There are several foundational characteristics of Qdots such as their surface chemistry, physicochemical and coating properties, that can vary significantly between different manufacturers, that need to be standardized before Qdots can be adopted into clinical applications. None of the commercially available Qdots are spectroscopically standardized and small changes in manufacturing practices have been shown to impact their quality and spectral performance.

Limited to Extracellular Targets: Aside from these logistical challenges, Qdots also have significant limitations in their practical use in flow cytometry applications. Due to their large size, many studies have demonstrated their limitations for intracellular biomarker analysis.

Potential Toxicity: Although in vivo imaging studies in mice suggest that Qdots are safe and non-toxic (Gao et. al. 2007) other studies have shown dose dependent toxicity to various cell lines in culture (Siohara et. al. 2004), and to address this, heavy-metal free and safety coated Qdots have been developed.

Incompatibility with Fixation: Another significant issue with Qdots use in flow cytometry is the apparent loss of fluorescence with some fixation methods. Low levels of heavy metals are not uncommon in formalin solutions, but it was only when Mario Roederer’s team published a paper describing the quenching effect of contaminating copper on Qdot fluorescence (Zarkowsky et. al. 2011), that the flow cytometry community were made aware of this effect.

Photostability: Unlike organic fluorophores, Qdots are highly photostable- and whereas there are examples of where this feature is desirable, there may be issues for some downstream applications if the Qdot signals cannot be quenched or removed.

There is no doubt that the physical properties of Qdots are highly desirable for flow cytometry applications- they are bright, with no photobleaching, and highly stable enabling additional analysis steps post-sorting for example. There are however nuances in their use and quality issues in their manufacture. As this technology evolves, some of these limitations will be addressed, and standardization of Qdots will certainly be pivotal for their widespread adoption.

One area where Qdots may shine is in the development of highly multiplexed bead-based flow cytometry assays, where different bead sizes could be complexed with Qdots of distinguishable colors and fluorescent intensities for capture and detection for a range of cellular molecules, potentially on a single laser instrument. This would represent a significant leap for this type of analysis and provide a path to point-of-care, high-complexity clinical testing.

The future of widespread adoption of Qdots in flow cytometry will require the maturation of quantum dot technology into commercial platforms that can be translated into high complexity, high performance assay kits and clinical diagnostics.