There is no doubt that flow cytometry requires a lot more controls than most analytical platforms, largely because of the intricacies of combining the variability of cells, with highly complex fluidics, optics, and electronics- all in one readout. Controls are needed to distinguish the background variations across all of these factors and help to ensure that populations are clearly resolved, and signals are real (Wingender, G. 2013). In addition, controls minimize variability due to a range of factors: from sample collection, processing, transport, and storage before analysis, which can be critical for clinical applications.

Any flow assay is only as good as the experimental design and controls that are employed. Previous blogs have focused on instrument setup and calibration so in this blog we explore the different types of flow cytometry controls that are employed to address a range of factors from panel performance to cellular staining that is at the heart of assessing cellular biology (Hulspas, R. et.al. 2009).

Figure 1. Summary of the process of establishing controls for different flow cytometry applications. Although many of these are implemented daily for every experiment, others are used for specific endpoints and assay types. At their core, all controls provide utility in establishing real signal to noise background and support the confidence in the flow cytometry data that is generated.

Unstained Controls are used to control for background signals that are derived from the autofluorescence of the cells under analysis and are used to set voltages and gates to identify negative populations appropriately. These cells must be processed identically as the test samples, other than without the addition of antibody conjugates. There are several reasons for this- stressed cells tend to have higher levels of autofluorescence and dead and dying cells can bind non-specifically with several reagents that may increase autofluorescence. Autofluorescence within samples can be minimized by reducing the level of serum within FACS buffer to <10%, using fixatives such as PFA to the lowest effective concentrations, and analyzing fixed cells within 24 hours. It is also important to ensure that hemoglobin from lysed RBCs is effectively washed out since hemoglobin absorbs at 541nm and 577nm which can interfere with signals from the fluorophores PE and PE-related tandem dyes. Running processed but unstained controls can account for all of these factors and so distinguish real signal from background interference.

Reference Controls are used to ensure that the processing of the sample for flow cytometry analysis is performed consistently. Typically, within the FlowMetric lab, this is represented by a bank of frozen PBMCs or frozen cell lines that are used consistently over time, for panel optimization and validation. These are used to represent the expected staining profiles for samples and establish application settings on the cytometer for the experiment. For many clinical applications, proficiency testing material not only fulfills this role but also enables the assessment of testing performance across different laboratories for specific tests and instrument calibrations. Just like any other reagent, it is important to perform lot-to-lot comparisons for reference controls to ensure consistency over time, and to this end, reference controls can act as a standard across longitudinal studies.

Single Staining, Compensation Controls. As we have explored in many of our previous blogs, fluorophores emit light across a spectrum of wavelengths that go far beyond the detection window for their designated channel on the instrument. There is often a great deal of spillover into other channels, which must be mathematically compensated sequentially across all of the fluorophores used in a panel.

Compensation controls can be single fluorophore-stained cells, or beads (not a combination of both to avoid the effects of autofluorescence across channels) and should be at least as bright as the experimental samples. Ideally, there should be both a positive and negative population in the compensation control sample and sufficient events within each channel collected for accurate compensation calculation. Most cytometers now perform compensation automatically, rather than requiring manual voltage adjustments, but it is still worth a few simple steps to ensure appropriate compensation has been applied to avoid post-acquisition adjustments during data analysis.

Reagent controls are used to ensure the reagents are working as expected and are present in the correct concentration for optimum performance. For flow cytometry applications, this typically refers to antibody titration, which is performed to identify the optimal antibody concentration to maximize the sensitivity of detection, with minimum non-specific binding. It is important to hold other staining parameters such as cell concentration and incubation time and temperature as constant as possible across titrated samples since these can all introduce significant variability in staining. There are two principal ways of assessing staining: the resolution index- which determines the degree of separation between a negative and positive population; and the staining index which describes how much a positive population is separated from the negative population. These are calculated as follows:

B. Separation Index was used to select an optimal conjugate concentration for population separation. In this example this is T3.

Even after compensation is performed, fluorescence spread can occur particularly from brighter fluorophores. Careful panel design can help minimize these effects, and the use of Fluorescence Minus One (FMO) or FMX (fluorescence minus more than one) controls can provide a measure of spillover in a given channel. FMOs are performed by staining the sample with all of the fluorescent conjugates, except the one that is being tested; this enables the assessment of spillover contribution of the other fluorophores into that channel. The FMO control is a fundamental requirement for high complexity flow cytometry because it allows for correct gating of the target population. However, FMOs do not provide a measure of non-specific antibody staining in that channel. For this readout, we refer to isotype-, isoclonic, and negative controls. It is important to note that FMO and FMX controls are generally not needed for all channels and provide the greatest value in situations where positive and negative population gating is challenging, such as with activation markers or CCR expression. 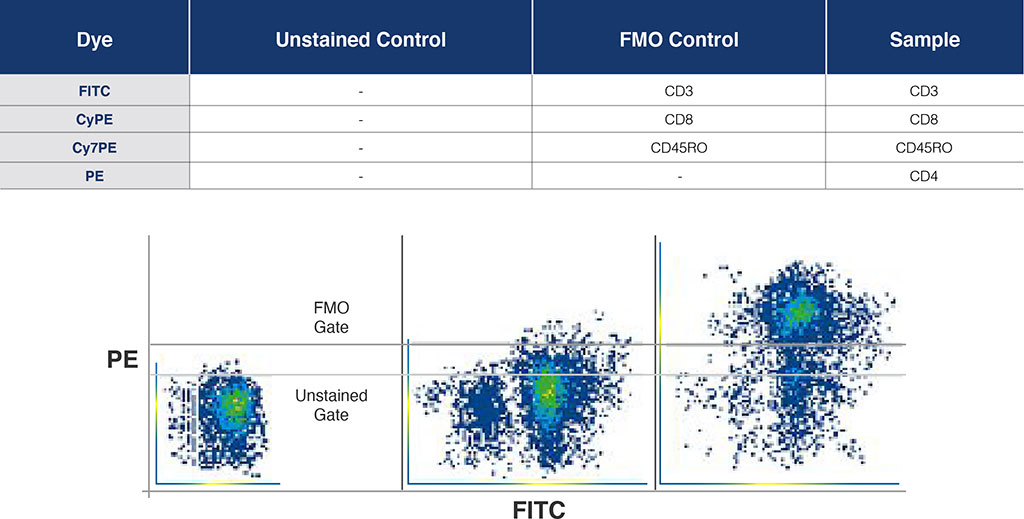 Figure 3. A flow cytometry plot after compensation in an experiment to discriminate CD4+ and CD4- T cells. The unstained gate and the FMO gate are shown. Note how the FMO gate allows better separation of positive from negative cells, compared to the negative control.

Isotype controls are used to assess the background signal resulting from non-specific conjugate binding. Ideally, this is achieved using an antibody of the same isotype/host species/class and subclass of heavy and light chains and fluorophore load as the primary detection antibody but is specific for an antigen that is absent from the experimental sample. They shouldn’t be used to distinguish positive and negative populations or set positive gates.

Isoclonic controls are used to determine if the fluorophore-antibody conjugate used in the panel can mediate non-specific binding to the experimental sample. This is performed by staining the sample with the conjugate in an excess of identical (isoclonic) unlabeled antibodies. Within this system, the target antigens are all bound with the unlabeled unconjugated antibody and the fluorophore-labeled conjugate can only bind non-specifically- if no fluorescence signal is detected, then it is confirmation that the conjugated antibody cannot bind non-specifically to the sample. It should be considered completely qualitative and if the binding is observed, then the panel should be redesigned with an alternative conjugate.

As we have explored in previous blogs, dead cells can be the source of signaling artifacts that can skew signals and result in erroneous data. It is therefore imperative that all flow cytometry analysis is performed with the inclusion of viability dyes. There are various forms of viability dyes available, for all different types of applications.

Using a viability control enables dead and dying cells to be gated out of the downstream analysis, therefore eliminating the impact of their increased autofluorescence, and non-specific antibody binding. All of these factors work to improve the dynamic range and sensitivity of real signal detection.

Figure 4. Example of LIVE/DEAD viability staining of lysed whole blood. In the sample shown, LIVE/DEAD staining is used to discriminate the live cells (96.7% of the lymphocyte population).

Controls to Assess the Binding of Antibodies to Fc-Receptors:

Many cell types such as monocytes, macrophages, dendritic cells, and B-cells express Fc-receptors on their surface, and these can lead to non-target specific conjugate binding through their Fc regions resulting in false positive or uninterpretable flow cytometry signals. Fc-receptors (FcR) bind antibodies with high specificity, but the common misconception is that this is solely species-specific and FcRs from one species can readily bind antibodies from other species to varying degrees. There are several potential solutions to address this problem.

Controlling for Non-Specific Binding of fluorochromes to Fc-receptors

The binding of antibodies to Fc-receptors (FcR) is well described, but lesser-known is the fact that some of the fluorochromes can also bind some FcRs.

In such instances, the appropriate Fc-blocking process must be employed before staining with the conjugates, and potentially avoid the use of cyanine-based fluorophores when staining certain cell types such as monocytes with high FcR expression levels.

Similar to this effect is the non-specific binding of fluorochromes to antigen-receptors.

Phycoerythrin (PE) and allophycocyanin (APC) are specific antigens for some T and B cells. Several studies in mice have demonstrated this effect, that although minimal, may have a significant impact on data from subsets of B-cells and gamma, delta T-cell population. These include studies showing that up to 0.1% of all mouse B cells identify PE as an antigen in a BCR-dependent manner (Pape et al. 2018) and about 0.02% of all mouse B cells are APC antigen-specific (Pape et al. 2018). Furthermore, about 0.02-0.4% of all gamma-delta-T cells (mouse and human) recognized PE as a specific antigen (Zeng et al.). Similarly, CD205 is highly expressed on the surface of dendritic cells; in mice, this C-type lectin has been shown to have an affinity for PE-Cy5.5, whereas human CD205 has been shown to bind other Cy5.5 conjugates including PerCP-Cy5.5, APC-Cy5.5 (Park et. al. 2012; Jahrsdörfer, et. al 2005).

As a result of these factors, fluorochromes should be carefully selected based on the target populations of interest, and certain fluorochromes avoided. In instances where limited fluorophores are available, isoclone controls may be employed to assess the extent of non-specific conjugate binding.

Whenever examining a biological system, it is important to include both negative and positive biological controls. For example, when examining cell stimulation, it is important to run both a negative unstimulated control alongside a positive control stimulated sample, for example, cell stimulated with CEF peptide pools, SEB, PMA+ ionomycin. These controls can help ascertain the specificity of the staining as well as uncover the experimental limitations of the test system. Biological controls are especially valuable for intracellular staining that often displays a higher background. Activation markers and intracellular cytokine signaling profiling frequently appear as smeared signals on flow cytometry plots, it is therefore essential that the appropriate threshold is set for a positive gate, and the use of appropriate experimental controls are central to this effort. This may also be important for non-stimulatory experiments such as longitudinal studies of samples collected for clinical studies. In these instances, the flow cytometric profiles of healthy versus disease states, as well as patient-specific profiles should all be captured within the experimental controls.

A. PBMCs unstimulated (Left) and Stimulated (Right), gated on CD3+ T Cells. With stimulation cells undergo multiple generations of proliferation as shown by the Cell Trace Violet Staining which is also Ki67+ compared to unstimulated cells

Flow Cytometry is a complex process and distinguishing real signal from background requires the use of several different controls to account for all of these factors. The incorporation of careful control design into your experimental plan can pay off many times over in the quality of your flow data. There are three major considerations for good flow cytometry practices that drive the use of controls:

Following these principles will help ensure that your flow cytometry experiments are both robust and reproducible.