Being a scientist in the field of oncology has its ups and downs. The scope of your quest is very large, with numerous causes for different cancers both environmental and internal. Your search leads you to a mechanism of action and discovery of the cause of studied cancer. You struggle for years to block this mechanism and give hope to patients. Years are spent gaining evidence and finances to get to clinical trials to find that you have been correct with your analysis. The treatment is successful going forward but data indicates some troubling headwinds. Initial treatment of patients is successful; however, patients are coming back after the rebound of cancer and the second treatment fails.

Unfortunately, this scenario happens. The human body is an amazing form. All the mechanisms of growth and maturation lead to adjustments so that physical growth halts upon maturity. There are physical characteristics that differentiate the gender and allow for reproduction. Cancer is an aberration of our normal biology. In treating cancer, we wish to return it to a healthy state but in doing so, we add more complexity to the biology and the cells/tissues can respond with more adaptation. Unfortunately, we usually find cancer when they have produced a large enough cell population to cause a problem. Within this tumorigenic population is a diverse group of cells that add to the complexity of treatment. Using flow cytometry, scientists can investigate the diversity of cancer cells. Flow cytometry can also scan a large number of cells to detect rare populations of cancer cells at early stages, allowing for the greatest chances of success.

Breast cancer is a well-studied disease state with great progress made in the treatment of patients. Early detection is the key. Estrogen receptor-positive (ER+) comprise the majority of breast cancers (American Cancer Institute). Fatalities from ER+ come from latent detections of the disease and the tumor cells becoming metastatic (Early Breast Cancer Trialist Collaborative Group 2005). Tamoxifen is an established and well-studied treatment of breast cancer with great success. Tamoxifen treatment does produce resistance in one-third of cases, leading to metastatic potential if the treatment course is not successful (Musgrove and Sutherland, 2009, Droog 2013). It is this treatment resistance that causes therapeutic regimens to include phosphorylation inhibitors (or other treatments) to block the development of resistance. 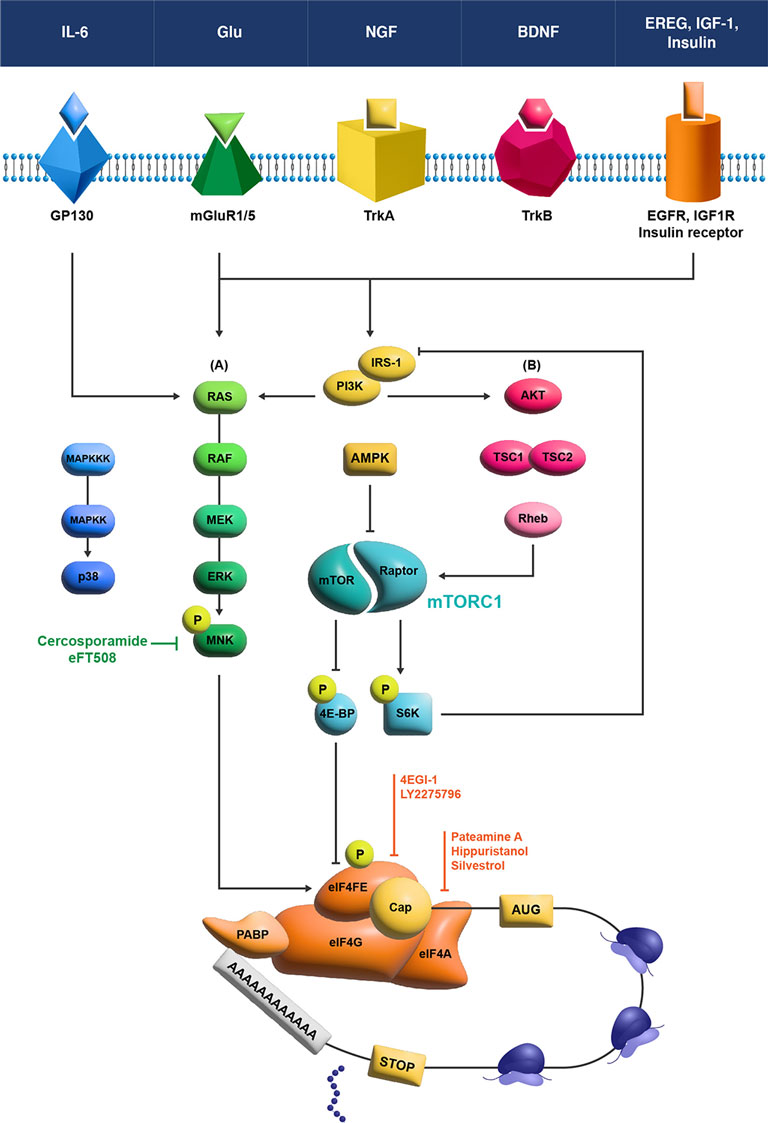 Tamoxifen resistance can develop in a variety of pathways, however, most prominently this resistance develops through hyperactivation of epidermal growth factor receptor (EGFR), including phosphatidylinositol-3 kinase (PI3K) mutations and MAPK-ERK activation (Campbell 2001, Miller 2010). A member of the PI3K, mammalian target of rapamycin (mTOR), and MAPK pathways, are primary contributors to tamoxifen resistance (Schiff 2004, Miller 2010, Karthik 2015). In a study of MCF7 tamoxifen sensitive and resistant cells, comparing the translation factors between the two, an increase in eukaryotic translation initiation factor-4E (eIF4E) expression was measured (Geter 2017). eIF4E is known as a proto-oncogene that when silenced, can inhibit tumor growth. mTOR phosphorylation regulates eIF4E, but with dysregulation of mTOR in diseases such as cancer, there is an upregulation of eIF4E (Maracci 2022). This affects a cell’s life cycle potentially producing cancerous cells or tumor resistance.

In the development and treatment of breast cancer, not all cancer cells are equal. With the initial tamoxifen treatment, certain cells are very sensitive and respond to treatment by dying off. 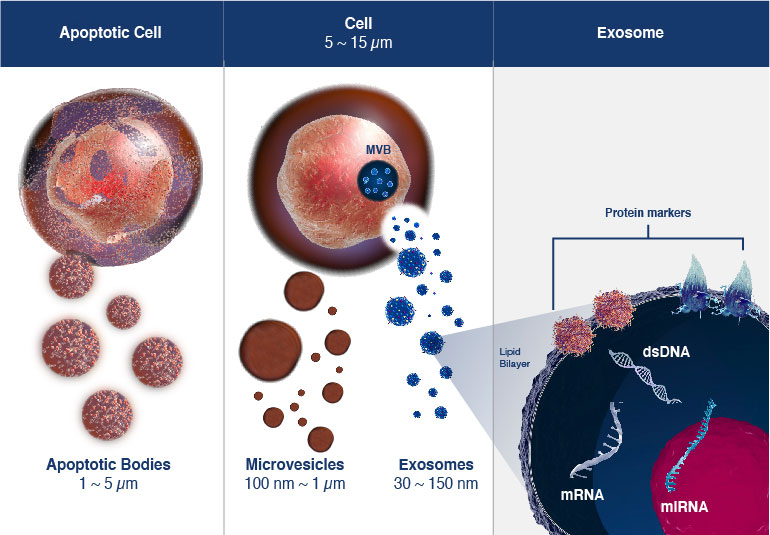 Figure 2: Diagram of potential extracellular bodies and genetic inclusions in the exosome.

Other cancerous cells have varying degrees of sensitivity to tamoxifen and survive the initial treatment by beginning the development of mechanisms of resistance. Tamoxifen resistance not only occurs within a single cell but can be transferred to neighboring cells through exosomes. Exosomes can be formed with microRNA (miRNA) which can be internalized by neighboring cells conferring similar characteristics such as tamoxifen resistance (Bach 2017). Communications between cells allow for commonality in function or form. In this case, traits negative to the patient can be transferred to more cells increasing the need for stronger medical intervention. ADIPOQ, a gene encoding adiponectin, elevated levels of which are associated with better survival rates of breast cancer patients (Chung 2017). miRNA-9-5p is highly expressed in breast cancer metastasis and advanced breast cancer stages (Krell 2012). Liu et al. (2021) studied MCF-7 tamoxifen-resistant cells showing that exosomes (isolated from the MCF-7 tamoxifen-resistant cells) can transfer the miRNA-9-5p to parental MCF-7 cells resulting in tamoxifen-resistant in neighboring cells. Therefore, upon the initial tamoxifen treatment and the elimination of sensitive cells, resistant cells that survive the treatment can expand their population.

Tamoxifen treatment resistance is only one of many mechanisms in the treatment of cancer that present issues for patient treatments. The strategies used today are increasingly multi-focal and treat the patient for cancer as well as potential adaptations that produce treatment resistance. Flow cytometry is a key tool for studying these mechanisms. As mentioned earlier, flow cytometry can quickly analyze a large number of cells measuring a number of specific markers to find even the rare event.

Investigating phosphorylation events that play a key role in treatment resistance, numerous phosphorylation events can be investigated given proper conditions. Phosphorylation markers require more care in the specificity of the reagents used, the timing of fixation of the cells, and permeabilization of the cell membrane to allow access to the intracellular events. For the in-depth study of specific cells (or exosomes), flow cytometry allows for the collection and sorting of cells for numerous investigatory studies. Cells can be separated from the general population and isolated. Using the isolated cells to investigate mechanisms involved can remove background noise of testing the entire natural population of cells providing stronger results of the single population of cells. FlowMetric has years of experience with these types of studies. The results found in these studies provide evidence for research and business decisions to move the studies forward with the greatest potential for helping patients.

Patrick Kudlacek graduated from the University of Nebraska with degrees in chemistry and biology before obtaining his Ph.D. in molecular biology from Creighton University. His post-doctoral studies were in the field of electro-physiology of the BK channel in mesangial cells of the kidney (patch clamp studies). Much of his career has been spent with Ximerex Inc. developing technologies for transplanting porcine tissue (Islet of Langerhans, heart, lung) to primates. More recently, Patrick has been developing flow cytometry services at a Midwest CRO and providing services to worldwide companies before joining FlowMetric’s Business Development team and expanding their services.